Sketching with My Father 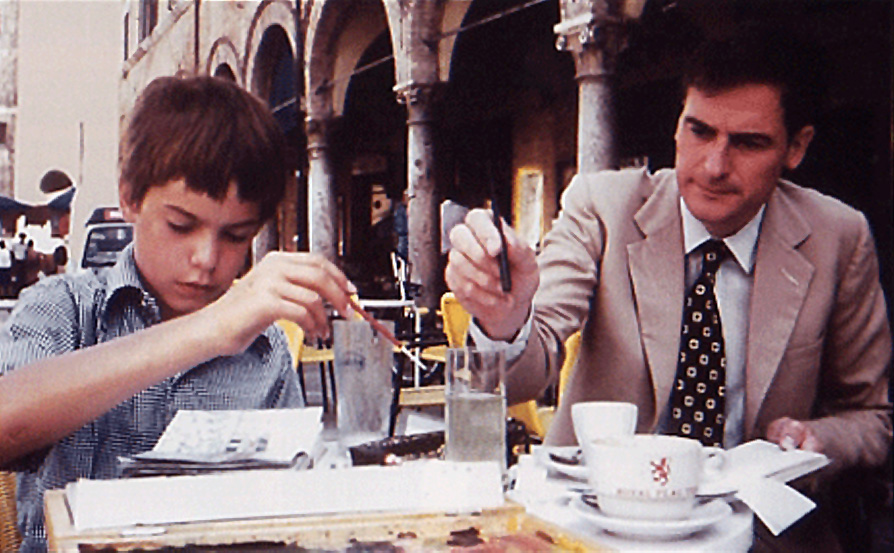 Sketching with my father is the corner stone of my architectural education and from about the age of ten my parents took me to see the great master pieces of European architecture. In each city we visited,

My father and I would spend the day sketching while my mother took my sisters shopping or to a beach.

Sketching in a foreign city is not simply a matter of plonking yourself down in front of the local masterpiece, Baedeker in hand. First you need to find the building or view that is genuinely interesting and this may be a building unknown to the art historians. My father always took great pleasure in drawing a great work which was never written up. All too often people are led to appreciate architecture through the eyes of art historians or the celebrity status of the architect. This my father sometimes took to extremes. I remember once in Borromini’s St Ivo in Rome he took great pleasure in rendering a fairly banal picture frame rather than the church itself.

One also needed to think of orientation, most critically working out where the sun would be in three hours time so that you were not looking directly at it later in the day. A café in the right location was an important element. Cafés provided the basic infrastructure of a chair, table, water for watercolours and a shield from people watching. Finding a café overlooking the right view with the correct orientation was often fairly tricky. To satisfy all these criteria was a bit like trying to get a ‘Q’ on a triple letter score in scrabble. Our favourite was the Gritti in Venice which for the small fee of a very expensive Cinzano one can sit all day and sketch Santa Maria della Salute overlooking the Grand Canal with no disturbances.

The other major complication was materials. We had a policy never to carry ink out with us, because of the damage one loosely tightened lid in a suitcase can do to an entire wardrobe. Far greater than a misplaced red sock in a white wash.

So on arriving in Rome, Prague or wherever, we always needed to find an art shop and buy ink and other materials we had forgotten. Finding good dip pens was also a problem; once we found a shop in Venice which sold dip pens which had nibs that could be folded away after use which was ideal for travelling. Ink generally was a bit of a liability sketching even if bought on site. I remember one particularly windy day in Venice when we were sketching St Stae sitting on the steps by the Grand Canal and a particularly strong gust of wind lifted the bottle of ink off the pavement and caused it to splatter all over my father’s rather inferior cream trousers. This was a source of great humour that evening as we had been urging him to get rid of them all holiday. 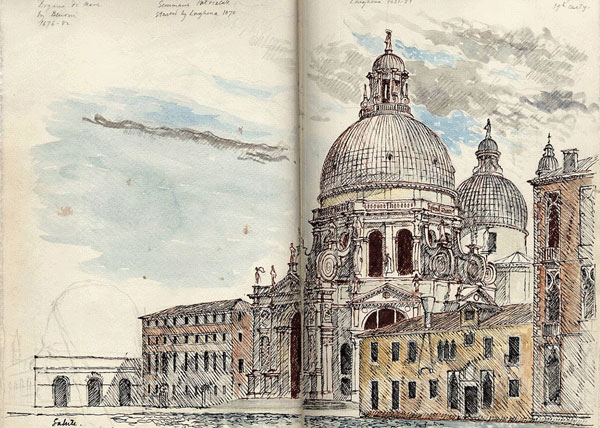 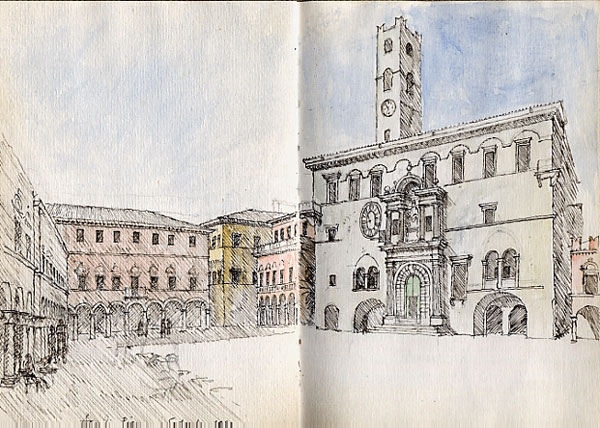 We generally brought sketch books with us. My father until the mid 80s always used canvas bound sketch books bought at Sénèlier’s in Paris. But since then he has taken up using sketch books with marbled covers which are sold in small boutiques in Venice. The paper type needs to be chosen with care. One of my father’s marbled sketch books has paper which has the feel of cloth and so bleeds like blotting paper when you try to get a nice ink line. Other papers do not allow the ink to absorb at all – the problems are endless. The important issue for my father was that you had a sketch book rather than loose leaves of paper and the sketch book was to be hard backed and not spiral bound. One of the cardinal sins was to tear a page out because this would ruin the structure of the book.

For several years the whole family went to Venice en masse. The combination of the architecture with the Lido nearby – proved an unbeatable attraction. For these trips we used to travel by train which was great fun. I always loved waking up and seeing some provincial station flash past. Every year when we passed the suburbs of Verona my father made us crane our necks to see Sanmicheli’s Madonna di Campagna.

We usually went to Italy, most often to Venice or Rome, and Florence only once. My father is not a great fan of Florence because it had too many tourists and not enough baroque to make it worthwhile.

On one trip when I was thirteen, we went to the slightly lesser known towns of the Adriatic;- Rimini, Ascoli Piceno, Loreto, Ancona and Split, now part of Croatia. When sketching one notices things which one would not see otherwise. For example pilasters in Ascoli Piceno routinely have three rather than five or seven flutes which is an unusual ‘spécialité de la maison’. 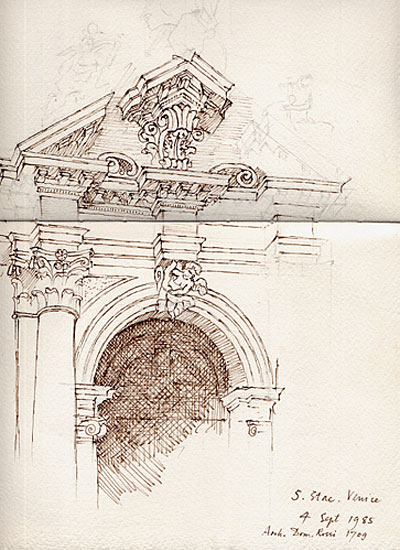 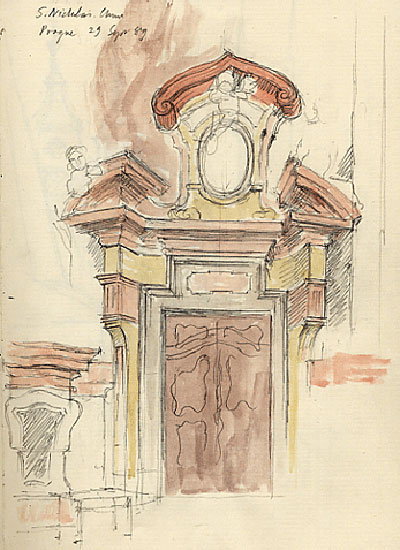 These trips were as much about food as they were about architecture. On one trip we did a chart of all the restaurants we had been to and judged them on gastronomy, ambience, service and most importantly for a thirteen year old – quantity. I meticulously filled in a chart at the back of my sketch book each evening. The most memorable meal we had was the most delicious papardelle in a creamy fungi porcini sauce. It came to the table in the frying pan served by a waiter who looked like a figure in a Carpaccio painting. In my imagination I see him with a small red cardinal’s cap on but I suspect that is just memory jazzing the scene up a bit, it was over twenty years ago.

We did not always go to Italy, but this was our preferred country by far. We went to Prague in the summer of 1989 only a few weeks before the Berlin wall came down. We felt that we were at the centre of Europe and at the centre of history too. My father was giving lectures to undercover pro-democratic organisations, we also unwittingly smuggled in some xerox parts for some anti-establishment friends of Roger Scruton. The customs officer found it and was so embarrassed that he did not know what it was that we were let through. We saw for the first time the fantastic curved forms of Dientzenhofer’s and Santini’s churches and it was incredibly inspiring. It made my father feel deprived that we do not live in a time that commissions baroque work as a matter of course.

The furthest we’d ever been was a trip to India which was paid for by a hotel group who wanted to use my father to design a hotel near Agra. We were taken all over Rajasthan and deposited at various sites for hours at a time which was ideal for getting stuck in to sketching. We spent at least two days at Fatehpur Sikri, we also sketched the Taj Mahal, the Red Fort and numerous other buildings. 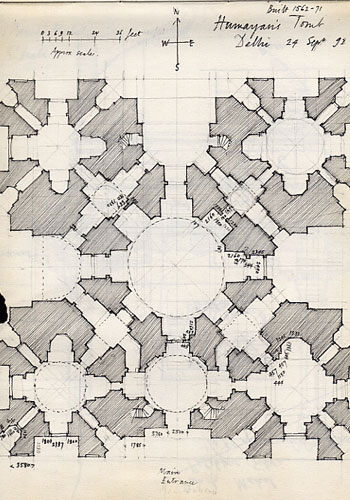 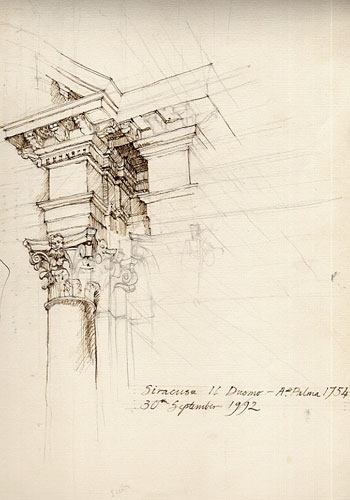 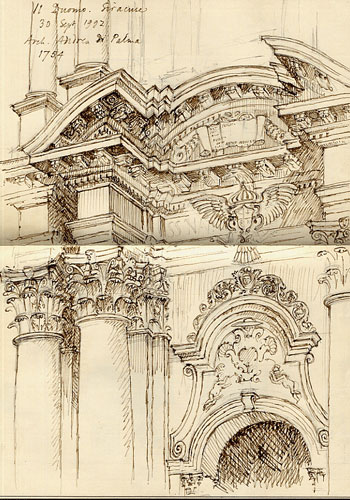 My father did a measured drawing of Humayan’s tomb which has an uncanny similarity to the early plans for St Peter’s in Rome. Whether this is due to a common architectural source or because of the inherent qualities of masonry is a great subject for a PhD, but we never really looked into it. My father has an aversion to an over academic approach to architecture which I share. Too much knowledge is definitely bad for creativity, you need to approach it with the naivety and zeal of a child.

In 1992 we went to Syracuse in Sicily following a classical architecture exhibition in Bologna which was opened by The Prince of Wales. The Cathedral is a rich blend of three of the greatest periods of Mediterranean architecture. The main structure is a 5th century BC Greek Doric Temple which has been turned into a church and has some superb Byzantine details – particularly the cosmatesque floor. To crown it all is a fabulous baroque front built 1728-54. Our drawings are similar but my father seems to have done far more than me. I’m not sure why that is, perhaps I wandered off half way through, I know I did spend a lot of time trying unsuccessfully to track down Caravaggio’s “Burial of Saint Lucy”. We had intended to see all the major sites in Sicily but when we arrived in Syracuse and found a west facing café we felt that Palermo, Noto, and Agrigento would all have to be visited on other trips.

For me this is the point of sketching. It forces you to go slowly and see things which take time to notice. So my advice to the students of Notre Dame is to buy a hard backed sketch book with good paper and go to some old and obscure European town. You could choose the florid baroque of Southern Germany or perhaps the Moorish work of Andalucia and come home with your sketch books filled with work by unknown architects. Make sure you find time to track down the best restaurants and always remember to buy your ink on arrival.